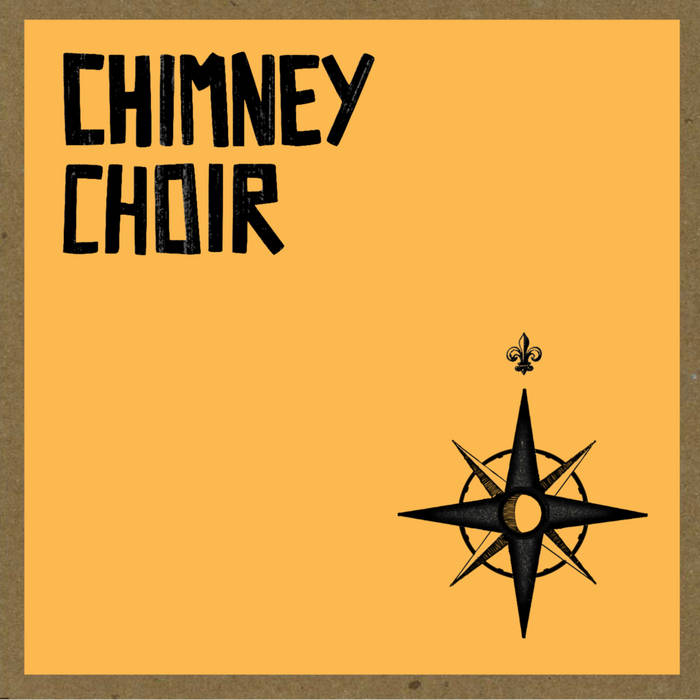 Don Paris Schlotman Honesty drips from their lyrics and playing, and having seen them live I can attest it is not studio tricks, but a natural alchemy between the band members turning wood and metal, muscle and grit into the purest gold. Favorite track: sad song.

(compass) was composed and arranged by Chimney Choir between March 2012 and April 2013. The songs were born on the road - sketched out, improvised, jammed, performed, scrapped, and reinvented over months of touring in the US, Germany, Holland, and Belgium. They were hashed out around campfires in between gigs, sung in the van during long stretches of driving, and tested in front of a new audience every night. (compass) has themes of themelessness and vague nostalgia and should be filed away between celebrate and concentrate.

They wanted to capture a unique sonic character for the recording. The drums were tracked in an historic 1920's theater, they sang in a makeshift vocal booth in an urban carriage house, and retreated to the mountains for the finishing touches. They incorporated field recordings from a Belgian train station, Kris picked back up her childhood fiddle, and a new dimension was layered with the bass of Tom Plassmeyer. Co-producer Jeremy Averitt helped weave the acoustic and electronic elements together while mixing with in an antiques warehouse.

(compass) was released over four months in a series of semi-theatrical performances at Leon Gallery in Denver, CO. Each monthly performance investigated a cardinal direction in hope to 'find the compass.' The performances were inspired by minimalist Fringe theater, where production was suggested or even imaginary. The shows experimented with sound collage, storytelling, puppetry, dance, and ritual. They lit candles, burned incense, and painted their faces. "We're establishing dreamlike environments where the audience can't really tell the show from reality after a certain point." Rynhart said of the performances. The final episode took place on June 23rd with the full release the album. (compass) was found after a mock game show within a show at the antiques warehouse near Denver's bohemian South Broadway neighborhood where a few weeks later, Carl's Astrovan would be burglarized. A very lovely place on a lawless street.


Produced by Chimney Choir
Recorded in and around Denver, CO
Mixed by Jeremy Averitt and Chimney Choir
Mastered by Paul Cox @ 226 Recordings - Houston TX
Abi McGaha Miller - clarinet on Not What I Thought
Pickle - fiddle on Time Machine Algorithm II and Nova Scotia

Chimney Choir combines folk harmonies, ambient electronics, and swirling textures of rhythm and melody into a style of music that is not easy to define. Their performances often take on a theatrical quality that has incorporated puppetry, ritual, dance, storytelling, interactive video and even a sci-fi mini-drama. Their newest album, "(light shadow)" will be released in January of 2020. ... more

Bandcamp Daily  your guide to the world of Bandcamp